On the old Apple DOS 3.2 disks was a cool Integer BASIC program called “APPLE-VISION”. In hi-res graphics, it drew a room with a TV, and after the picture was complete, the man on the screen danced to the song “Turkey In The Straw”. It was amazing to see what that 16K Apple II was capable of doing! Released originally by SoftTape and later included by Apple on their early DOS disks, APPLE-VISION used a shape table to animate the dancing man and a tone-generator subroutine to play the music.

The program was written by a programmer named Bob Bishop. He was the keynote speaker at KansasFest 2011, and his talk discussed his history with the Apple-1 and Apple II, as well as the early programs he wrote.

Here is a screen capture of the movie:

In 1975, while working at the Jet Propulsion Laboratory, Bishop saw the ads for the early microcomputers Altair and IMSAI. Although they interested him, he did not want to have to assemble his computer. He continued to watch the early home computer industry, and when he saw the ad for a “fully assembled” computer sold by the Apple Computer Company, he decided to check it out. He drove to the address on the advertisement, and was directed to Steve Jobs’ home. Although the Apple-1 that Jobs tried to show him didn’t work properly, he was sufficiently impressed to plan on buying one. Through a company owned by a friend, Bishop purchased an Apple-1 with a keyboard, power supply and monitor in October 1976. Using his prior knowledge of FORTRAN, he began to write programs in Woz’s BASIC. He came up with a simple Star Trek program for the Apple-1, which was subsequently published in a computer magazine.

When the Apple II appeared in 1977, Bishop could see its potential and wanted one, but was concerned about his investment in the Apple-1. He returned to Apple’s headquarters, now in Cupertino, and spoke with Woz and Mike Markkula about the problem. They discussed it, and decided that if he returned the Apple-1, he could upgrade to an Apple II for a discount. Bishop ordered one, and on July 5, 1977, his Apple II (serial number 0013) arrived. It was a 16K model, with only cassette tapes for data storage and retrieval. His early model lacked the ventilation slots that later versions of the computer included, and the heat generated actually caused the case to sag. (He brought this to the attention of someone at Apple, and the case was replaced with the style that was used throughout the rest of the run of the Apple II).

As a very early user of the Apple II, Bishop suffered from the problems of insufficient documentation. He did not have a proper manual that explained how hi-res graphics worked, but with experimentation he discovered the soft-switches (the memory locations that turned graphics on and off, switched graphics pages, etc). Using his discoveries, he wrote assembly code to make use of the hi-res graphics, and came up with Rocket Pilot, the very first Apple II hi-res graphics game. He later came up with Saucer Invasion and Star Warriors, sold through Softape. 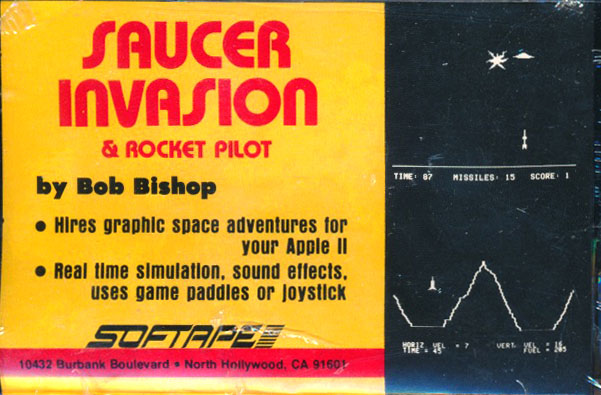 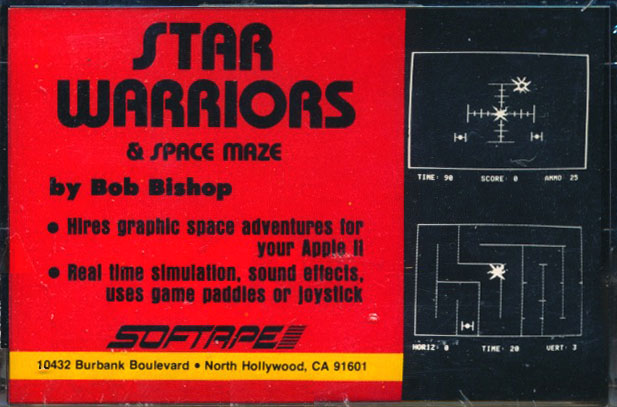 In April of 1978 he began to work on what would become APPLE-VISION. It started with Bishop’s experimentation using shape tables. He took images of a dancing woman, drew them on graph paper and created tables for each of these dance poses. He put them together to create a moving picture of this dancing character (which looked more like a man than a woman). He drew a TV screen to surround the image, then added a room for the TV to sit in. It made use of the sound capabilities of the Apple II by using a sound routine to play a song along with the dancing. He even wrote his own hi-res text generator to put the words “HOME SWEET HOME” on the wall of this room (though he later realized that he actually created a malformed backslash character — this didn’t really matter, because that character was not used in his program. Oddly, when Apple selected his program to include with their early DOS disks, they put the copyright down as “1977”, even though he didn’t write it until the following year. 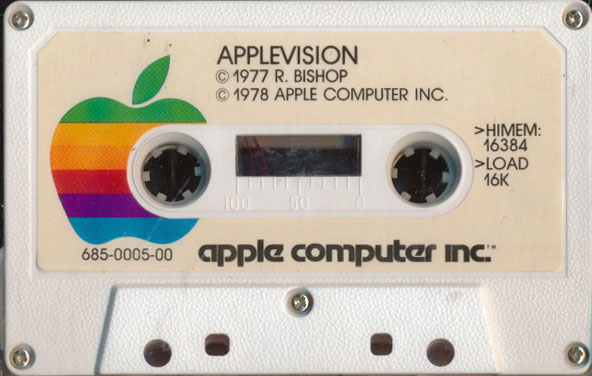 Bishop’s next discovery involved the cassette input to the Apple II. He wrote an assembly language routine that would take data coming in through the cassette port, and store it in memory. He could then play it back through the internal speaker. The final program, APPLETALKER, was also sold on cassette through Softape. (A few years later, Apple’s lawyers told him that he could no longer use the name APPLETALKER, as it infringed on Apple’s proprietary name, “AppleTalk”). 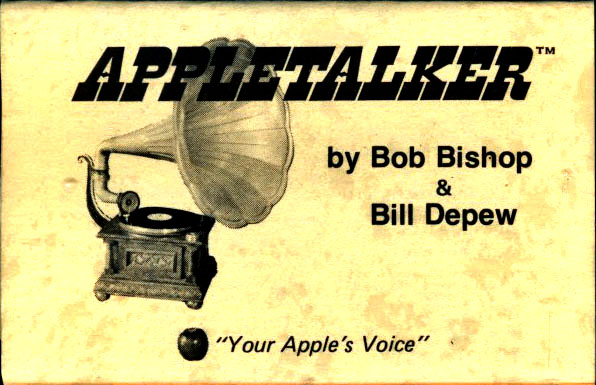 In his consulting work, Bob became involved in a new game show on CBS, Tic Tac Dough, which started airing in the summer of 1978. This show was one of the first to make use of computers to control the game board. Nine Apple II computers were used, one for each of the nine squares of the board, and these computers were in turn controlled by an Altair 8800.

Despite his groundbreaking software, which took advantage of the special features of the Apple II (in particular the hi-res graphics and the sound, which its competitors, the Commodore PET 2001 and the Radio Shack TRS-80, lacked), Apple Computer had mostly ignored Bob Bishop. Other companies, however, were noticing his work. Atari contacted him in October 1978, and offered him a job. Though he turned them down, they came back later and renewed the offer, at a higher salary. He decided to take the offer — and then he got a call from Apple Computer. He met with Steve Wozniak and Michael Scott, who offered him a job with a better salary plus stock options. He took this offer, and became Apple employee #187 in December 1978. 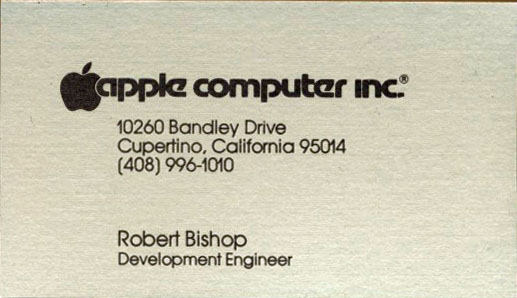 He found that his position at Apple was not very clearly defined. He was not assigned to work directly on any particular projects, and so was free to work on anything that interested him. (Apparently part of the motivation to hire him was, in part, to prevent him from working at Atari). So he continued work on speech recognition and synthesis. He wrote a program to take digitized input on an Apple II and display it on the hi-res screen in the form of an oscilloscope. He participated on the Apple III project with Wendell Sander. His office was shared with Jef Raskin, the man who created the early concepts of the Macintosh. And Bishop was responsible for creating what would ultimately become Apple’s Research and Development department.

The time at Apple came to an end on February 25, 1981, “Black Wednesday”. Along with approximately forty others, half from the Apple II engineering team, Bishop was fired by CEO Michael Scott. One of the consequences was that he lost a third of his stock options, just a few months short of when they would have come to full value.

The day after he was fired from Apple, he was actually called by someone else at the company and offered his job back — but without his stock options. He declined the offer, and moved on to other projects. He wrote articles for a number of computer magazines, and even had a regular column in Call-A.P.P.L.E. He also collaborated with a friend, Lucia, on a software product called Micro Painter, and wrote a book with her called AppleVisions.

While living in Santa Cruz, California, he attended a meeting of the Santa Cruz Apple Users Group (SCAUG). There, one attendee offered him a talk show on a local radio station. At first he didn’t think it was something that he would be able to do, but as he started it he found the show interesting and fun. Amongst other topics, Bishop introduced the concept of “fuzzy logic” to his listeners, and interviewed Steve Wozniak.  After a ten-year run, he quit doing the show, sold his home, and toured the country in a motor home.

After Bishop finished his visit to every state and Canadian province, he settled down again. Amongst other computer projects he returned to, he began to focus on what he felt was the major limitation of computers that have appeared on the market after the decline and cancellation of the Apple II. He has not been a fan of the Macintosh or Windows-based PCs, and feels the same way about the various iOS devices that have sold wildly for Apple in the past few years. Despite their continued increase in power, he felt these computers were crippled in a way that the Apple II series was not. They had more powerful application software, bigger memory, faster processors, and larger storage devices. But what modern computers lacked was an easy to use programming language. Assembly language and C++ are incredibly powerful languages, but they are not interactive, and they are definitely not easy to use. What the Apple II had available from very beginning was a built-in BASIC programming language that was moderately powerful, and interactive. It invited experimentation in a way that is not possible with more sophisticated languages. Although it clearly had some syntax limitations that were frustrating, it was a language that even children could learn to use.

With these thoughts in mind, Bishop began in 1994 to design a new programming language that had the advantages of Applesoft and Integer BASIC, and added support for the more sophisticated sound and graphics of modern computers. This new language, called “SiMPLE” (“Simple Modular Programming Language and Environment”), he has made available as a free download for Windows-based computers. It is interactive, just like BASIC, but can still create self-executing modules. On the web site linked above, there are examples of what the language does, as well as download links.

You can view Bob Bishop’s personal web site by clicking here, where he outlines events of his life, from the purchase of his first Apple-1 up to the present. He also has a list of software he has written on this page. Included on that page is a link for Rocket Pilot, and has scans of the pages from the magazine in which the article was first published, with a full Integer BASIC program listing.