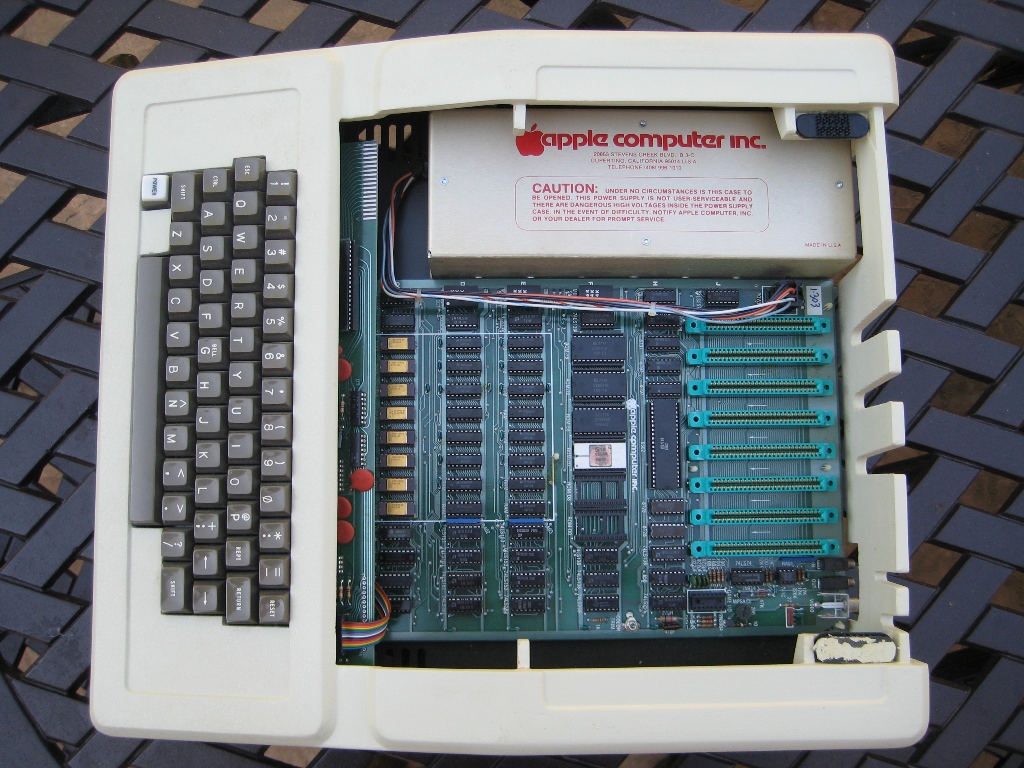 Applefritter.com member, Howie Shen, had the great good fortune in October of 2011 to take possession of a very old Apple II model. This computer, serial number A2S1-0101, was originally sold in 1977, the year the Apple II was first available . From his description on Applefritter:

I am the new owner of a very early 1977 Apple II system, serial number A2S1-0101. The machine is in amazing condition, having been zipped up in its brown vinyl Apple bag in the closet of the original owner for the better part of three decades. Remarkably, the components are all original, never upgraded, including the completely unmodded rev.0 motherboard serial number 1.303 with Integer BASIC ROMs. Also, the early case has no vents, and appears hand-painted and rather crudely finished at the edges. Best part is that the system works perfectly!

It really is a time-capsule find inside and out … I bought it from the son of the original owner who said he couldn’t remember it being used all that much, and the overall condition certainly supports that. The inner wall of the case has a stamp indicating “July 6 1977” so that’s either the assembly date for the complete system or just the case … Note the “16K 4K 4K” memory select blocks; this system was ordered with 24K that surely was a whopping configuration that early on.

There are relatively few online images of Apple II systems with early silkscreened logo power supplies and cases without ventilation slots, so maybe these photos reveal details that folks are curious about. (For example, I didn’t realize that the earliest power supplies had simple handwritten serial number stickers.)

In addition to the computer itself, I received a nice selection of documentation including the original direct-from-Apple sales receipt (check out the price in 1977 dollars!), and among the accessories and disks a pair of very early paddles. These were a big surprise, as they look to be the ones shown in the original advertisements, but I always thought they were just mockups that were replaced with the familiar square paddles with big round spinners when the systems actually shipped.

One of the most unusual characteristics of this early Apple II is the lack of ventilation slots in the sides of the case. As noted during his keynote given at KansasFest 2011, early Apple employee Bob Bishop had also purchased an Apple (his was serial number 0013) that lacked the ventilation slots. Bishop used his computer apparently more than the original owner of this Apple II, as the heat build-up caused the case to soften and sag. Whereas Bishop (and likely many other early Apple II owners) brought the problem to the company’s attention and were given upgraded cases with ventilation slots, the owner of this computer presumably did not use it enough to cause the case to sag, and so did not seek out a replacement from the company.