I know that my posts here in the past few years are often just saying “Hey, I was at KansasFest” and not much else, but, hey, what can I say, there’s not much new in Apple II history these days.

That being said, I’m going to feature something written by someone else. My KFest roommate this year was Dave Rogers, a newcomer to the event. He writes a blog, “Nice Marmot”, and has a good, comprehensive discussion of his experiences at this year’s event. You can see what he thought about it here, and it is well worth a read.

Dave also made a discovery that passed me by completely. Way back when, Brooke Boering had a company called Vagabondo Enterprises, and created a visual programming language called CEEMAC. It allowed creation of hi-res graphics animations on the Apple II. Back around 1982 or so, he released a demo disk that highlighted the capabilities of CEEMAC, and called that demo “Fire Organ”. It was intended to be a self-running demo, with some ability to interact and change how it worked. 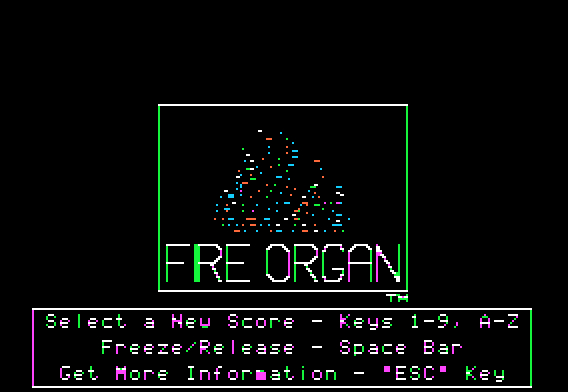 I had a copy of Fire Organ back in the day, but never spent the money to get the CEEMAC programming language disk.

What does this have to do with KFest? Well, for the Apple IIe that I brought along, I neglected to include any disks to boot it with. Or I thought I had not done so. When I plugged it in and turned it on, I discovered that it did boot up something, and found there was a copy (so I thought) of Fire Organ in the disk drive. Oh, cool, I thought; I’ll just run this as an interesting visual demo in my room here. (Okay, green-screen monitor, so less interesting than it could have been, but…)

Dave saw this at some point during the week, and took a closer look at the disk. He pointed out to me that this was not the Fire Organ demo, but was a copy of CEEMAC v1.61 (beta), meaning that this was actually the programming language used to create the Fire Organ demo! I literally have no idea where I got this, but he made sure it got into the hands of 4am, so it could be imaged for the Internet Archive, as it appeared to be different from the version that was already there.

So, thanks to Dave’s sharp eye, there is another version of CEEMAC available for the world to look at. I appreciate his enthusiasm, and also appreciate the work done by Brook Boering years ago to create an amazing graphical programming language for the Apple II.

And, although I don’t do much programming these days, and do not do any hardware hacking, I do still have a strange urge to create song parodies. Two years ago it was “KFest Funk“, last year it was “Week of the KFest“, and this year it was “Rockhurst”, a parody of Marty Robbins “El Paso”. The video stars Ken Gagne, editor of Juiced.GS, the longest running Apple II magazine still in print, and Chris Torrence, editor of Assembly Lines: The Complete Book.