A Tale of the Disk II 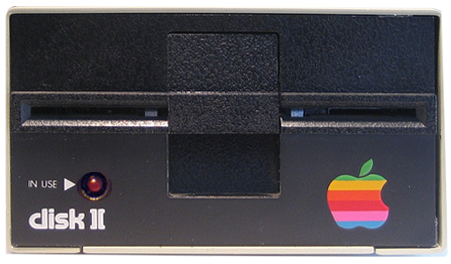 Last year was noteworthy as the 35th anniversary of the release of the original Apple II. This year, 2013, has its own significant anniversary to commemorate. It was 35 years ago this coming July that the Disk II floppy drive was made available for the Apple II. As much as the Apple II was itself groundbreaking, the release of the Disk II was a similar watershed event in the history of Apple as a company and specifically for the Apple II. It is noteworthy that the keynote speaker at KansasFest for 2013 is Randy Wigginton, an important figure in the foundation of the Disk II and Apple DOS.

As with most such events, there is back story that often does not get repeated. And though tech news usually does not pay attention to history, the Disk II was recently a topic of blog posts. CNET News posted a story about the origins of Apple’s first disk operating system, specifically the original DOS for the Apple II. The story came to light because of a donation made to the DigiBarn Computer Museum in Boulder Creek, California. Though Randy Wigginton created the core RWTS (read/write/track/sector) routines that interfaced with the disk drive, it was Paul Laughton who was the primary author of Apple DOS. Laughton recently donated some of his original papers about the project to DigiBarn. Specifically, he gave them copies of the letters between Apple and Shepardson Microsystems, for whom he worked, and also source code listings for the original versions of DOS that were delivered to Apple in June 1978.

According to the story Laughton tells on his web site, he had a background working at IBM for a number of years, where he worked on all aspects of the operating system on the IBM 360 computer. This gave him a deep understanding of a how a computer should interact with various devices (telecommunications, disks, printers, and more).

One of the first jobs Laughton did for Shepardson was to work on writing a BASIC interpreter for a computer that Apple was designing in early 1978, code named “Annie”. Though this project was eventually canceled, it did bring Laughton into contact with Steve Wozniak.

The system on which Laughton did his work was a minicomputer that used punched cards for input of source code. This was compiled on a 6502 cross assembler, which produced 6502 object code that could be output to punched tape. What Laughton needed from Wozniak was a way to connect a paper tape reader to an Apple II, in order to get the code for his BASIC interpreter into an Apple II for testing.

When Laughton and Wozniak got together to work on the paper tape reader, he noticed that Woz seemed discouraged. Laughton asked him about it, and Woz told him of the disk controller and floppy drive project he had completed during his Christmas vacation in 1977 and had demonstrated at the Computer Electronics Show the following month. Now he had what he felt was an impossible to meet deadline for getting a fully functional disk operating system written and ready to go, in addition to the need for finishing up work on some aspects of the hardware design.

Hearing this, Laughton told him that he could create a disk operating system for Apple in a relatively short period of time. Woz was happy to hear this, and arranged for a meeting to make it happen.

(I recently asked Laughton about this by email, as it seemed to me that creating a disk operating system would be a very large task. He told me that his background in working with IBM systems made the whole process very clear in his mind. He said, “When looking at the task of writing the DOS, I knew the structure of the sub components needed and the magnitude of each of the sub components. I had, if you will, the Blueprint, in my head from day one. Actually, Apple DOS was not a major project when compared to some of the other tasks I had been assigned at IBM. It was a very simple system.”)

Apple and Shepardson negotiated a contract, which is summarized in the letter of April 10, 1978 donated to DigiBarn. Laughton would write and deliver to Apple a file manager, an interface with BASIC (both Integer and the Applesoft BASIC that was in development), utilities to backup and copy a disk, and “disk recovery” (the details about what that meant are not explained. The agreed upon price for this work was $13,000 ($5,200 immediately, and $7,800 on delivery). The promised delivery date was May 15, just thirty-five days later.

Laughton stated that his task was helped by Wigginton’s contributions to the project. Not only did he create the RWTS code, but Wigginton came up with the method used in allowing either BASIC to interact with DOS (specifically, watching printed output from a BASIC program for a Ctrl-D following a Ctrl-M; code after that would be a command for DOS). Using this trick made it unnecessary to create a new ROM version of BASIC that included custom disk commands; BASIC required no changes at all!

As far as the CNET story was concerned, that was the end of the story of the creation of Apple DOS, and the author of that story went on to discuss the impact of the Disk II to Apple. However, on reading the rest of the letters that were donated, there were necessary adjustments to the DOS specifications that required Apple to come back to Shepardson and negotiate further work to be done:

When one considers the few updates that were applied to DOS, from its original DOS 3.1 release, to DOS 3.2, 3.2.1, and through to 3.3, it is indeed impressive how well designed it was from the very beginning. It was not a perfect system; it transferred buffers around three times during certain disk operations (which was the foundation of later disk enhancement packages sold, including Diversi-DOS, David DOS, and Pronto-DOS). But like Wozniak’s Integer BASIC, it did an amazing amount of work in its small 10K footprint, with a small number of eventually identified bugs.

I would agree with CNET that Laughton’s work was immensely beneficial to Apple. It took the Apple II, which actually struggled in its sales compared to the other two members of the 1977 Trinity (the Commodore PET and Radio Shack TRS-80), and made it a more attractive option. According to sales numbers compiled by Jeremy Reimer in his December 2005 post on Ars Technica, during 1977 (the year in which each of those computers was released, Radio Shack sold one hundred sixty times as many units as did Apple, and Commodore sold six times as many as Apple. Clearly, the high entry fee of the Apple II ($1,298 for a 4K machine, compared to $495 for a PET and $599 for the TRS-80) was a damper on its first year of sales. Even in 1978, the sales of Apple’s competitors were significantly higher.

When one looks at the sales numbers in 1979, however, it is a different story. The increasing availability of the Disk II, falling RAM prices (making 16K and even 48K systems more affordable), and the introduction of the Apple II Plus raised Apple’s sales by 360% compared to 1978. Even though both competitors came out with their own floppy disk solutions (August 1978 for the TRS-80, and spring 1978 for the PET) at a similar price point as the Disk II, Apple’s disk drive was faster and more reliable. Though still ahead in terms of volume, the TRS-80 units sold in 1979 increased by only 30%, and the PET by 50% over the same time period. And sales of the Apple II continued to grow over the next several years, peaking in 1984.

Without a doubt, the reason we have iPhones, iPads and Macintosh computers today is because Apple became a highly successful and profitable company starting in 1979, due to the success of the Apple II in those early years. And the Apple II owes its success in a large part to thirty-five-plus days of work by a former IBM employee. Bravo, Paul Laughton; we salute you!