Posted on September 23, 2012 by Steven Weyhrich

Back in the late 1980s, Apple II developers and users were dissatisfied with the amount of attention that Apple as a company was devoting to the Apple II. Despite its position as the real breadwinner for the company (the Macintosh was still struggling to support itself), the Apple II was not getting much corporate love or resources. Attendees to the first KansasFest (Apple II Developer’s Conference) in 1989 made a point of letting Apple know of this disparity. And Apple promised to make things better.

It happened to some extent, but not to the extent that the Apple II community wanted. One of the things that did appear in the year after KansasFest 1989 was a publication from Apple (yes, they were $19.95, but many were given away for free) that specifically told anyone interested in the Apple II what that computer could do. The Apple II Guide first appeared in the fall of 1990, and provided information about the Apple II for users new and old. It had a historical timeline, explained the basics of the currently selling models (Apple IIe, Apple IIc Plus, and Apple IIGS), discussed productivity tools such as AppleWorks, hypermedia (featuring HyperCard IIGS), and the Video Overlay Card. It further discussed Apple II and Macintosh data exchange, troubleshooting, customer support, dealers (with a nation-wide listing of authorized Apple dealers in every state in the U.S.), talked about ProDOS and GS/OS 5.0, listed user groups and popular software, and even featured popular books, periodicals, and online services that could be used as Apple II resources. It also included capsule stories about how people who had Apple II computers were using them for business, education, and home use. 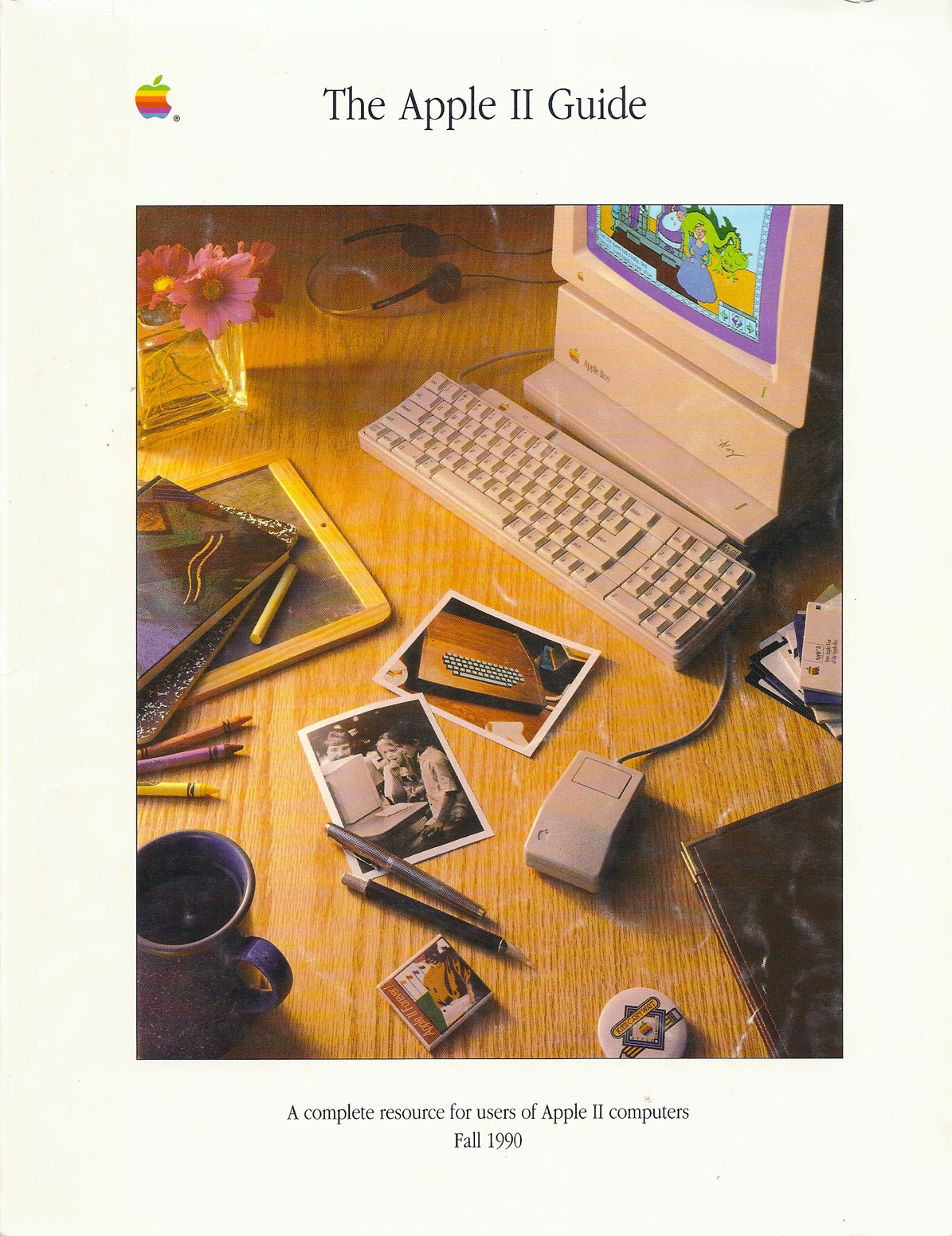 Notice on the cover photo the various bits of Apple II paraphernalia and history that is displayed. We have a Woz-signature Apple IIGS, a photo of an Apple-1, a photo of kids using an Apple II (again, the focus on education that Apple had in their corporate mindset at the time), a copy of a button from the Apple II Forever event that launched the Apple IIc back in 1984, and a button from Apple’s “Kids Can’t Wait” program, in which they donated computers to schools.

And Apple did not stop at this. They created an updated volume of The Apple II Guide for 1992. It contained similar information with appropriate updates (it mentioned some of the features of GS/OS System 6.0, for example). Take a look at the cover of the 1992 edition: 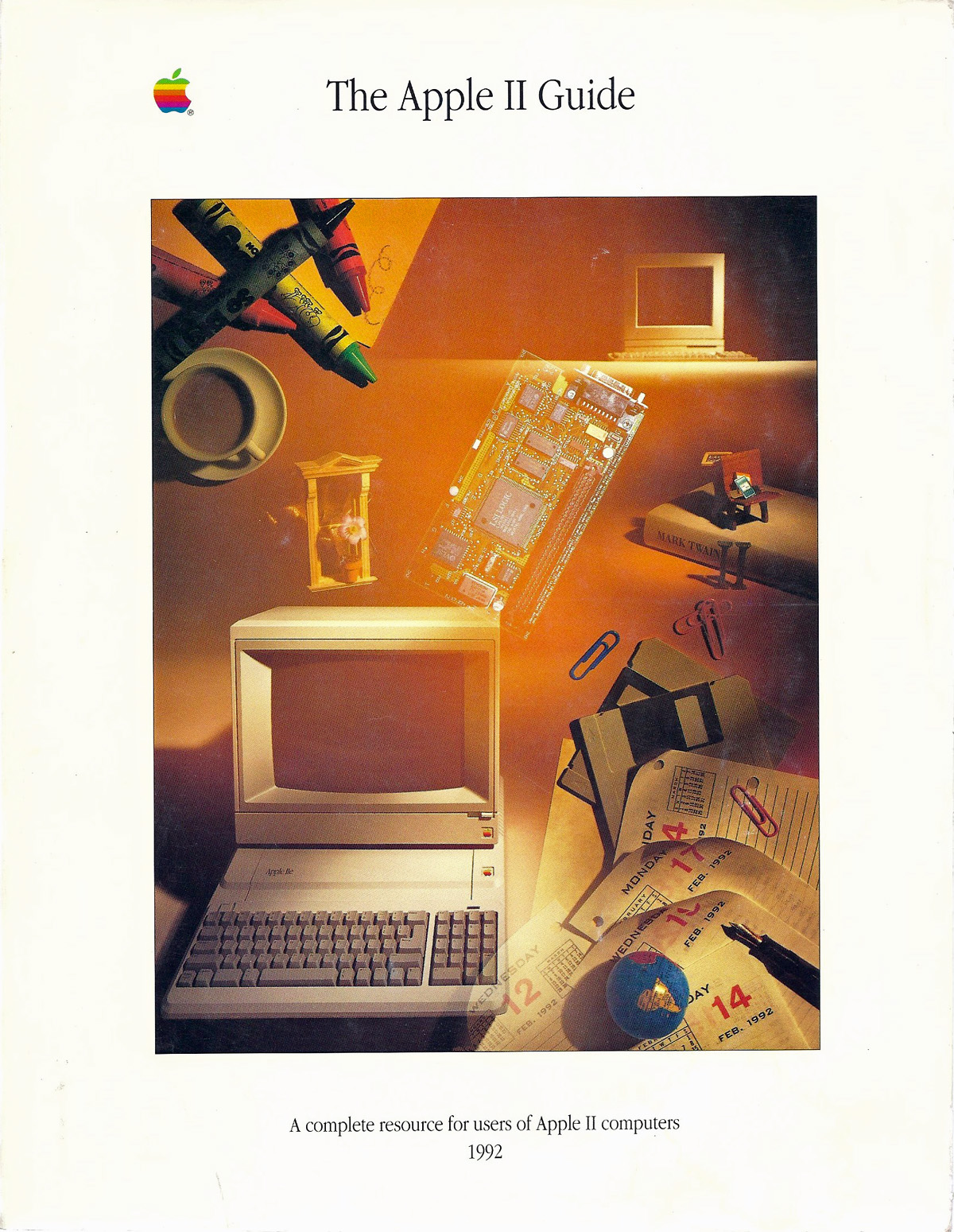 Again, a symbolic grouping of various Apple II items. Crayons and coffee for school and home use of the Apple II; a picture of the Apple IIe Emulator card for the Macintosh LC (pictured at the top of the photo), a window with a flower (not sure of the significance of that item), a Platinum Apple IIe, and paperclips and calendar pages (possibly a business reference, but rather weak). And on the right upper side, a model of the Roman numeral “II”, next to a book with the name “Mark Twain” on it, with an old-style school desk on top of that. And most of the world would look at that as just another scholastic reference.

Those in the know, however, were aware of the reference. It was at the September 1991 Apple User Group satellite conference that plans had originally been in place to announce an upgrade for the Apple IIGS, a model that, like the Macintosh, would come with a built-in 3.5 inch floppy drive, as well as a built-in SCSI hard disk (since System 6 ran best from a large capacity drive). Code-named Mark Twain (from his famous quote, “The reports of my death are greatly exaggerated”), this product was pulled from the satellite meeting at the last minute, based on an executive decision. It was not until prototypes of the Mark Twain began to show up in 1996 that the details of this project were better understood (since Apple “does not comment on unreleased products”).

What is also interesting, with regard to The Apple II Guide, is a photograph that Mike Westerfield and Jim Pittman came across in 1996 when they got to look at the prototype and associated materials that had been included with it. The photo is almost identical to the one that appeared on the cover of the 1992 edition, with the exception of the upper right:

So, had the Apple IIGS Plus (my guess at its product name) been released, this photo would have been used for the cover of the 1992 edition of The Apple II Guide. How would have the Apple II History turned out differently?