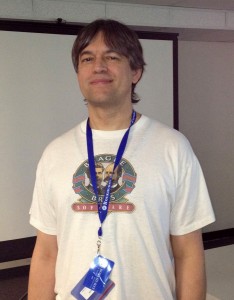 Randy Brandt spoke to us about his history with programming and with AppleWorks. He discussed his personal history, and getting his start in programming in 1976, learning FORTRAN in high school. This set the foundation for the programming work he did in the rest of his life. He later got involved with the Apple II in 1981. He learned Applesoft from Nibble and Call-A.P.P.L.E. (particularly the All About Applesoft book). He started his company JEM Software while in college, before he had any products to sell, and named it after his girlfriend (and later wife — her initials). He wrote a program called Grade Aid to help with keeping track of grades for educators, selling it for $10.

After graduation, he taught in high school, but did not have access to an Apple II for several years. He met future programming collaborator Dan Verkade at an FM radio station, and with that job he was eventually able to purchase an Apple IIc when it was new. He purchased GPLE and Merlin Pro to use for programming. He began to write documentation for Beagle Bros and ultimately got involved doing programming there. He worked on Beagle products Extra K and Pro-Byter and documentation for those and other products, and came out with a product of his own, Big U.

He learned some information about how AppleWorks managed text input, and started on MacroWorks to allow the program to have the ability to record and playback keystrokes within the program. This worked with AppleWorks version 1.3. He later updated this to SuperMacroWorks, with enhancements that supported the new Apple IIGS in 1986. This competed somewhat with AutoWorks from the Software Touch (a company formed by former Beagle employees Alan Bird and Mark Simonsen), but still did well.

In 1987, Brandt created his own AppleWorks extensions, PathFinder and Patch Mania, sold under the JEM Software name, working out of his home while continuing to collect royalties on MacroWorks and  SuperMacroWorks. That same year Bert Kersey retired and sold Beagle Bros to Mark Simonsen. They created the engine for the TimeOut series of AppleWorks extensions, which led to a large number of useful things that could be done with AppleWorks, including the penultimate macro program there,  UltraMacros.

The TimeOut series made its debut at AppleFest in 1987 in San Francisco, and was a big hit. It was an exhausting time to work that show, and Brandt vowed to take a break from his TimeOut efforts; however, on the way home with Mark Simonsen he came up with ideas for three new TimeOut applications.

With the formation of Claris Corporation, the new company realized that they had none of the customer registration information that had been collected over the years from buyers of AppleWorks (they had actually been discarded). Partly to update AppleWorks, but mostly to regain that data, Claris came out with version 2.1 of the program to try to rebuild that database. Although Claris wanted an update to a version 3.0, the original author Lissner was not interested. Claris turned to Beagle Bros to do the new version. Code-named “Spike”, it was not very good pay, but it ultimately gave control of AppleWorks to Beagle (since they would now know the entire code base).

AppleWorks 3.0 was released in 1989. Brandt released other products to enhance AppleWorks, though ultimately he broke away from Beagle Bros to do his own work. Beagle licensed all of the Apple II products to Quality Computers, and Brandt released other enhancements through JEM Software. In 1993 he began to envision a major rewrite to AppleWorks, a version 4. They negotiated with Claris, and convinced them to allow the program to be released. He later came up with version 5 of AppleWorks, which came out in 1994.

Today, Brandt is working on iOS versions of some old software, such as the game IO Silver.

← The Apple II Was About Games
What Is A Demoscene? →