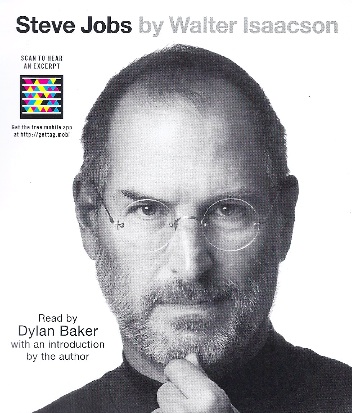 I’ve just finished the new book about Steve Jobs, written by Walter Isaacson (I listened to the CD audiobook version). I was not sure what to expect as I started it; there had been much said about this book when it was first released last fall. Isaacson’s account was reputed to be very negative in his presentation of Jobs; some comments I read felt that it was too negative.

For my part, I really found no surprises, as regards his behavior. I have enjoyed learning about the inside story of Apple Computer through other books I’ve read about Apple in the past, and they have always prominently featured recounts of Jobs and his famous temper, his poor social skills in dealing with people, and his maddening perfectionism. The Little Kingdom by Michael Moritz (1984), West Of Eden by Frank Rose (1989), and The Second Coming Of Steve Jobs by Alan Deutschman (2000) are all in agreement about how hard Jobs was to deal with. The first two books deal with him before he left Apple, and the third takes the story up through his rejoining the company and bringing it out of near-bankruptcy.

This newest book, Steve Jobs, bares his conduct no less graphically than any of the previous ones. It adds details of his personal life that I have not previously seen in print. The stories of the creation and introduction of the Apple II and the Macintosh were already familiar to me, though in this book they were naturally more Jobs-focused than others. Personally, I found some of the most interesting and satisfying parts were those about the creation of the wildly successful products Apple has released during Jobs’ second tenure at the company: The iMac, iPod, iPhone, and iPad. Certainly, during this segment it appeared that Jobs had his head together better than he had previously – he had focus and a sensibility that he did not seem to demonstrate in his past efforts at leading his company. (An example of his previous lack of common sense was his demands that the assembly-line robotic equipment at the factory making the original Mac be painted different colors than they way they were designed, thus causing them to malfunction.)

As much as I enjoyed these parts, the chronicle of Apple’s ascendancy from a computer company to a media company, it was painful to hear the story of his cancer, his choices to ignore medical advice, and the tragic consequences of those choices. The entire book is, in a way, another rise and fall story (with a number of rises and falls happening along the way). The fall of Steve Jobs was a personal choice that was as much a part of him as were any of his successes. The book illustrates how he was able to accomplish so much by almost literally willing it to happen (his so-called “reality distortion field”), and how that personal disbelief in his illness was his undoing.

His complex personality, with its binary view of everything (good/bad, winner/loser, brilliant/sucky) was a part of him from his earliest days, was molded by adherence to Zen Buddhism, by his experimentation with mind-altering drugs, and by the era in which he grew up. Certainly, if Jobs had been a “nice guy” like his co-founder Steve Wozniak, he would have been unable to build the company that Apple became. He would not have been able to push so strongly for the various advancements that appeared under his leadership: a home computer that looked good in the home (the Apple II), the commercialization and distribution of the concept of the graphic user interface, a personal music player that was light-years beyond Sony’s original Walkman, a phone that was unlike anything else that came before it, and a tablet computer that really worked well and was usable by anyone. Not only did Jobs have the ability to push to create these great products, he also had the power and influence to push for changes in related businesses (consider the difference in the music industry today compared with where it was in the 1990s). A “nice guy” might have wanted such things to exist, but would not have had the demanding perfectionism that would enable them to appear, and to appear in the perfect minimalistic way in which they did.

Issacson’s book is a great read for anyone who wants to know the whole story of where these great inventions came from, and how they were conceived. I would hesitate to recommend it as a model for anyone to use as a lifestyle; Jobs had many faults, and the world would not be a better place if more people acted like he did. But he did what his “Think Different” commercial talked about – he pushed forward the human race. And the world without Jobs would have not advanced technologically as fast as it did with him. Despite his idiosyncrasies, our world is lessened by his passing.