John Sculley Was Our Friend

Posted on January 1, 2012 by Steven Weyhrich

During the years when I was in the heyday of my use of the Apple II, my primary community was initially via Softalk magazine. Softalk treated all of Apple’s products with equal enthusiasm, whether the Apple II, the Apple III, or the Mac’ n Lisa, and so I had a neutral attitude toward those products. And, since most of what Softalk featured dealt with the Apple II anyway, those bits that did not were simply educational to me.

After Softalk ceased publication, I quickly jumped on board with former DOSTalk columnist Tom Weishaar and his new Open-Apple newsletter. Weishaar was more opinionated on the subjects that were dear to his heart, specifically his passion for the Apple II. His newsletter also introduced me to the A2 Roundtable on GEnie, which he began to manage in the late 1980s. During those years, the hot topics both in Open-Apple and on the A2RT were the increasing feeling of having to battle Apple’s perceived indifference towards the Apple II. We complained to each other of the unfairness of Apple’s focus and its love toward the underpowered Macintosh (whether 128K or 512K), instead of the Apple II, with which you could actually do something useful and do it quickly. Weishaar seemed to have access to people within the Apple II division in the company, and occasionally stories about the inequities between the Mac/Lisa group and the Apple II group appeared in Open-Apple. Between these two communities, I adopted the prevailing attitude that criticized Apple’s management, and blamed them for the dwindling population of Apple II users. 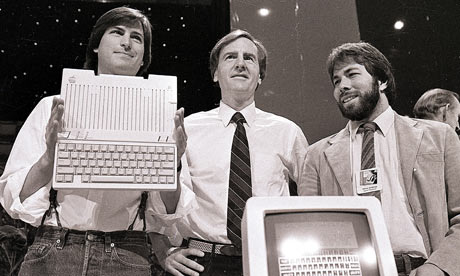 After Jobs left the company in 1985, CEO John Sculley remained in charge of Apple. As far as we were all concerned, all of the decisions made there were, naturally, his fault. Despite great products like AppleWorks, ProDOS, GS/OS and the amount of processing efficiency they manage to squeeze out of a 10+ year old product, Apple basically ignored the Apple II. Stories repeatedly appeared in computer publications predicting the soon demise of the Apple II line, and we were frustrated because Apple would not challenge them. As with the rest of my Apple II peer group, I resented Apple, I resented the Macintosh, and I resented John Sculley for what was being done to my favorite computer. I went so far as to put his name in my American Pie parody, Apple II Pie, replacing the name “Satan” in one of the verses with “Sculley”. It implied that he joyfully presided over the destruction of the Apple II.

Because of my attitude towards Sculley, I never was interested in reading his own book, Odyssey, or any other story about him. However, David Greelish of the Classic Computing and Retrocomputing Roundtable podcasts has just released a two-part interview he conducted with John Sculley. In that interview, Sculley points out that when he arrived at Apple, Steve Jobs was so focused on promotion of the Macintosh that he was fully prepared to pull the plug on the old, clunky Apple II line immediately. Sculley, a more experienced businessman, realized that killing Apple’s primary source of revenue in 1983 would have been disastrous for the company. Neither the Macintosh nor the Lisa had gained sufficient traction in the marketplace to make them profitable enough to carry the company.

Sculley asserts that one of his major efforts at the company in his early days was to keep the Apple II line profitable long enough to give time for the Macintosh to grow and itself become profitable. To give support to the Apple II division, Sculley placed his office initially in the Triangle Building, off campus, where they had been relegated. He gave his attention to that group, recruited Bill Campbell for marketing and Del Yocam to lead the division. Under his leadership that the company released the Apple IIc, the Apple IIGS, the Apple IIc Plus, and the Enhanced Apple IIe, as well as the various versions of ProDOS 16 and then GS/OS for the IIGS. In the process, the company actually increased its cash flow, and regained some of what had been lost to IBM PC and the MS-DOS operating system.

Because of these points that I had not well considered before, I must revise my opinion of Mr. Sculley, and I want to publicly apologize for anything that I may written in the past that was disparaging to him. Yes, the company as led by Sculley did eventually discontinue the Apple II line, first the Apple IIGS and later the Apple IIe, But as painful and disappointing as this was at the time, history has proven that these decisions ultimately were the right decisions. From the perspective of twenty years later, I can see that this was the right business decision. As was said in The Godfather, it was not personal, it was strictly business. And unfortunately, we all took it very, very personally.

Sorry, Mr. Sculley. You really were our friend, even though we didn’t know it.

← Remembrance Of Days Past
Retrocomputing News →

2 Comments on “John Sculley Was Our Friend”