When I first got my hands on an Apple II Plus back in 1980, the floppy disk that Woz had made available for his prized invention was old hat (heck, this computer was up to DOS 3.3!) Because of this, I never experienced any of the trials and tribulations of running an Apple II without a disk, as did the earliest owners. A few months ago, I wrote an article here called “Cassette Security“, in which I briefly discussed the ingenuity of early Apple II software vendors in making their products difficult to copy, and so harder to pirate. 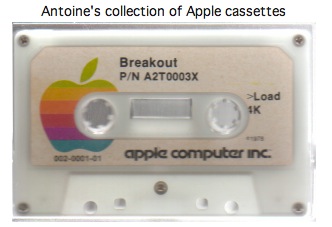 Antoine Vignau of Brutal Deluxe has been archiving this under-represented aspect of Apple II history on his web site. He has been cataloging as many early cassette-based Apple II programs as he can find, and posts an audio file of the program, if possible. This is making it possible for the first time in many years to actually access some of the earliest products sold for the Apple II.

My thanks go out to to Call-A.P.P.L.E. for making mention of one of the newest entries on the Brutal Deluxe site in this cassette category. It is a clever program called “Disk-O-Tape”, written by Dann McCreary. In an era when the new disk media was still expensive and cassettes were abundant and cheap, McCreary had written a program that would transfer an image of an entire floppy disk to a cassette tape. If you only had one box of floppy disks to work with, but had more programs than would fit on those disks, the cassette became a type of archive media to allow temporary offloading of that data in a safe place. Restoring a disk from the cassette was just as easy.

A related story that was also reported by Call-A.P.P.L.E. was about Apple Game Server, which has taken the retro-cassette concept to a new level. Here, the site designer has taken a number of old games, compressed them, and added a routine to make them load from the cassette input on an Apple II. To play these games, connect a cable from your playback device of choice (even an iPhone) to the cassette input of your Apple II. Start up the Apple II without a floppy disk in the drive, and press Ctrl-RESET to drop to BASIC. Type “LOAD”, and start playing the selected game audio file into the cassette input. The game will load and automatically start playing.

Advantage: It is really easy to load and play an old game this way. The files are very small (even the largest game could be no bigger than 139K (0.139 meg), and so load quickly.

Disadvantage: I’ve not been successful in getting Virtual II, my favorite Apple II/II+/IIe emulator to work with these files (I may not be converting them properly).

Between these web sites, here are two ways of looking at software from the earliest days of the Apple II, whether cassette only, disks stored on cassettes, or disk images converted to work as cassettes. Enjoy!

5 Comments on “Cassettes Are Cool”