Posted on October 6, 2011 by Steven Weyhrich

We all knew was it coming, but didn’t want to hear it. The news broke yesterday evening, informing the world that Steve Jobs passed away from (presumably) recurrence of his pancreatic cancer. He didn’t get a chance to do much as chairman of the board of Apple, after stepping down from his role as CEO in August of this year.

Jobs has a reputation of being a difficult person to work with, but he was driven to perfection in his work life and the products he promoted. His methods, whether or not they were good, resulted in amazing advances in getting great technology in the hands of the masses.

This is the Apple II History site, not a general Apple, Inc. history site, and so my only focus on Steve Jobs has been the parts he played in the development and maturation of that platform. Most of his love changed over to the Macintosh, because it was a representation of a newer, easier paradigm in computing, much as the Apple II was an advance over the teletype/printer/front-panel-switch methods of hobby computer interfacing the preceded the Apple II. But, as much as Jobs turned his attention away from the computer that got the company its first big success, he did not completely ignore it. Even as the Macintosh project was moving forward, Jobs was involved in the design of the Apple IIc, his vision of the Apple II as an appliance.

At first, I didn’t plan to make a specific post here about Jobs, as so much was being written on the web and in print since word got out about his death. But I did see three items that I wanted to share here. My thanks to Tony Diaz for posting the first two of these in his Twitter feed.

To start with, here is a picture that made the rounds a couple of years ago. I believe it was created originally by Jonathan Mak, who lives in Hong Kong (see his site here). It is a cool pictorial tribute to Jobs and the company he co-founded (and I like it better than one other profile of Jobs superimposed on the Apple logo): 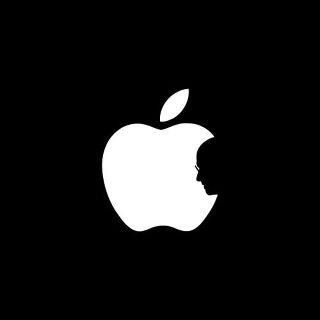 Tony also pointed me to an Applesoft program written by Chris Baird (link gone as of 4/14/13), a program that creates this image on an Apple II hi-res screen: 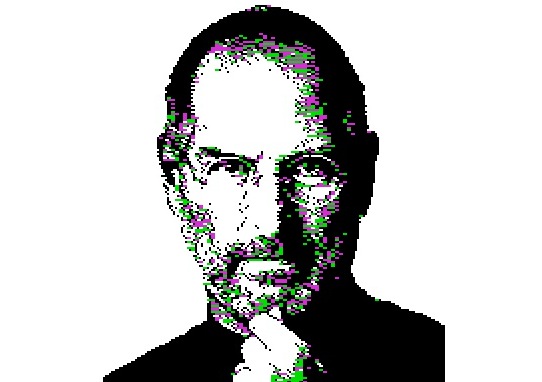 In my RSS news feed today, I came across a link to this video interview with Apple co-founder Steve Wozniak, speaking to the Associated Press:

Thanks to Ken Gagne, I would point you to this 1995 interview of Steve Jobs done by Computerworld. It was done in the era of his life when he was still two years off from being asked to rejoin Apple. It gives his insight on NeXT computer, what he thought of Apple, and other insights on the genesis of the computer paradigm that the Macintosh and NeXT computers pushed forward.

Finally, also from Ken, here are thoughts of the editors of Computerworld about Steve Jobs and his legacy:

Thank you Steve, for the many ways that your leadership pushed forward technical matters and made them simple to use in our daily lives.