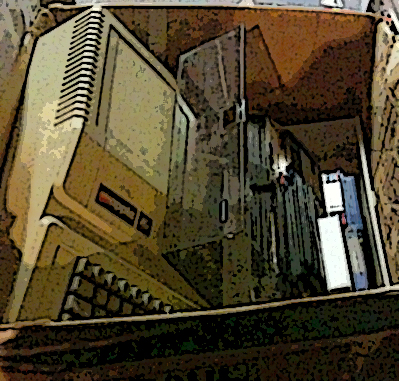 The end of one year and the start of a next has traditionally made us think of the past, present, and future. Perhaps that was where Dickens got the idea to use ghosts of those persuasions in order to tell his Christmas Carol story. In any case, the inspiration for today’s post comes from Dan Fogelberg’s 1981 song, Same Old Lang Syne. The story told by his song is of meeting an old girlfriend unexpectedly at the grocery story, and their conversation together afterwards. It is about the present and past, and contains the bittersweet feelings of sadness as she leaves.

The phrase “Auld Lang Syne” is loosely translated as “for the sake of old times”. It implies a remembrance of days past. As I listened to Fogelberg’s song again this year, it occurred to me that it could be adapted to re-discovering that old Apple II, in the basement or a closet.

Yes, I had bought myself a MacBook Pro
That helps me work and game and buy
I’d like to say it was simplicity
But I wouldn’t want to lie

I saw the years had been a friend to this,
My Apple II I knew so well
I gazed with fondness at its faded beige
And its missing letter “L”