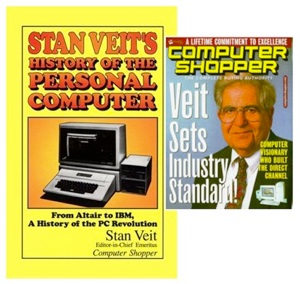 I’ve enjoyed listening to the audiobook reading by David Greelish of the book “Stan Veit’s History Of The Personal Computer”. (Greelish is the proprietor of The Classic Computing Blog, and just recently started a new podcast, The Retrocomputing Roundtable). You can find both of these podcasts on the iTunes store as free podcasts, or listen to the material written by Stan Veit here on Greelish’s web site. What I’ve enjoyed about listening to the first three chapters of Veit’s book is that it truly illustrates for me just how revolutionary the Apple II was when it appeared on the market. Veit’s book talks about the difficulties in using the pre-Apple II machines that were available. They usually needed to have a teletype for convenient input/output; the “glass teletype” (video terminal) had a cost that was beyond the reach of most early hobbyists. Saving programs was not easy, either. If a user had one of those teletypes, they often had a papertape reader and puncher included, so they could “save” their programs to punched tape. There were some cassette interfaces available, but they were just as difficult to use as the one on the Apple II, possibly more so.

Being reminded of the difficulties in using the Altair, IMSAI, and other pioneering microcomputers just makes me appreciate the many built-in features offered by the Apple II. In a day when those “glass teletypes” were also prohibitively expensive, especially if it was color, the Apple II could use one if you could get it, or a regular color television if not. Cassette interface for saving and loading programs? Built-in. The ability to increase the RAM from 4K to a full 48K, when the cost of RAM dropped low enough? No problem. Keyboard? Included. Sound? Absolutely! (How many Altairs or IMSAIs could do sound back in 1977?)

So, thanks to David Greelish and his efforts to bring Stan Veit’s history to life as an audiobook! It has enhanced my appreciation of just how smart Woz was.