The disk utility program “FID” included with DOS 3.3 was originally called “FISHEAD” by Rich Williams, the author. Older versions of the Apple II History suggested that the origin of the name “FISHEAD” was lost in the mists of time, but according to Tom Weishaar’s introduction to his letter’s column “Ask Uncle DOS” in the Feb 1987 edition of Open-Apple, the truth is finally told (again). (Thanks to Mark Percival for making me aware of this). 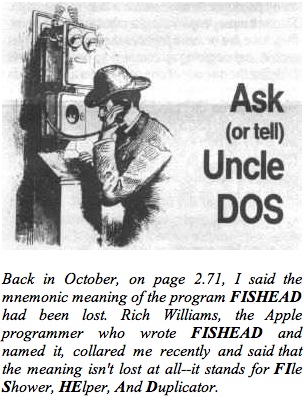